The OAKEYLIFE project is trying to conserve the sand pedunculate oak and protect its characteristic plants and animal species in the Peszér forest. The opening workshop of this project took place on 28-29 March in 2018 in Kecskemét and Kunpeszér. 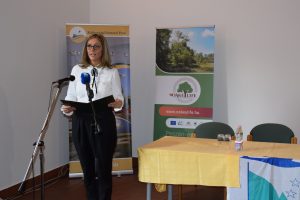 The opening workshop was organised by the winners of the OAKEYLIFE project where other organisations that run „LIFE NATURE” project were represented by presenters. On the first day of this event Andrea Gulyás, undersecretary of state of the Ministry of Agriculture, welcomed everybody in her opening speech. She appreciated the unique cooperation among the three organisations of the OAKEYLIFE project. In her opinion even Károly Kaán would be proud of this kind of cooperation. Károly Kaán was a forester, born 151 years ago, who recognised the importance of the protection of the natural assets. He created the principles of the nature conservation.

So far there has not been any kind of plan or guide which could have guarantee the survival of the forest steppe and its habitats and species. That is why the KEFAG ZRt and Kiskunság National Park Directorate and MME – Hungarian Bird Life organisation want to serve this goal with the won project. 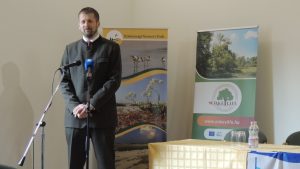 According to Ferenc Sulyok, the CEO of the KEFAG ZRt., this project is one of a kind, as this is the first time when a state owned forestry works together with the Kiskunság National Park Directorate (KNPD) and a civil servant organisation (MME) on such a huge habitat reconstruction program. Furthermore, being the winner of this project is a serious professional acknowledgement.

According to Sándor Ugró, the director of the KNPD, the cooperation of the participating organisations in the project in the long run will establish our actions in order to achieve the common socio-economical aim and to create such a framework within which we can meet the conditions of the efficiency determined by the national economy and of the natural conservation directed by our moral duties.

Gábor Bárány Phd., Head of Forest Management department at KEFAG ZRt. and the project manager highlighted why the reconstruction of the Peszér forest is unique as well as why it will affect the local communities advantageously if the project is carried out successfully. According to him the negative effects of the climate change, which affects the local people as well, can be moderated locally by a stabile forest steppe community which is to be created during the project actions.

Csaba Vadász Phd. National Park ranger and the project coordinator of the OAKEYLIFE project at KNPD said that the project would be carried out in the Peszér forest which is a NATURA 2000 site. An important goal is to identify, quantify and eliminate those factors which threaten the habitats of community interest so that their conservation status can be enhanced. A possible solution for this can be

the regeneration of species-rich forests with the composition of those adapted to the local environmental (edaphic, hydrologic) conditions. This way steppic Oak woods will be preserved, according to our expectations.

Bálint Halpern, who represented MME (Bird Life Hungary), is the coordinator of the monitoring actions within the OAKEYLIFE project. He emphasized in his speech that there are several species of community interest in the project such as the Scarce fritillary, Iris arenaria and the Gladiolus palustris. The protection and conservation of these species is one of the aims of the project. By the end of the five year program we will have completed the monitoring of species of the project area so we will know what positive effects our interventions contributed to our targets. 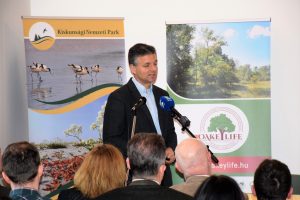 On the second day the guest could visit the Peszér forest and have a look at the results of some of the completed actions, a part of the forest which is densely invaded by the invasive species and the visitor centre, which is under reconstruction at the moment.
The biggest threat in the Peszér forest is the spreading of the invasive plants. So in a strongly contaminated part of the forest participant could hear about what methods will be used in order to eliminate these invasive species. At the last stop, massive natural regeneration of the Pedunculate Oak could be observed at the border between the forest and the sand grassland – which is a rather infrequent phenomenon. With this project we aim to provide possibility for natural regeneration of Oak woods, this way the Peszér-forest would remain an extremely valuable part of our natural heritage. 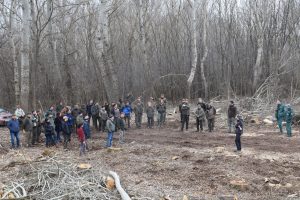 The people can follow the OAKEYLIFE program on the www.oakeylife.hu website and the can learn about those habitats and species which the project wishes to protect. They can also find out why it is important to stop the decline of biodiversity.

What makes the project unique?