On Day of Birds and Trees the KEFAG Zrt. and the KNPD together organised a three-station natural science game on 8th and 10th of May.

Kindergarten and elementary school students took part in this program. At each station the children spent half an hour and learnt some new information about nature and they could play as well in the Kecskemét Arborétum. The children could learn about the the bird of the year, the tree of the year and the species and natural habitat of the Peszér-forest. (The OAKEYLIFE project supported this event) 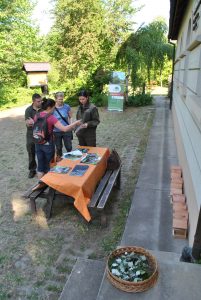 At the second station the children learnt about the flowering ash and the adder-fly. They could get the information in an interactive and playful way. The children were stunned when they found out that the addler-fly could have a 65cm wingspan.

At the third station the focus was on the peregrine falcon as it is the bird of the year in 2018. After giving some interesting facts about this bird like it is the fastest animal in nosedive, we also talk about what can we people do to protect these birds or nature in general. Before leaving this station, the kids played tag where some children were falcons and they had to catch the other children, who were the preys.

Thank for the 216 children (from Kecskemét and the nearby villages) for taking part in this program enthusiastically.

We look forward to seeing you here in the Arborétum next year.